Investigating what others are doing

While I suspect I’ll end up with some kind of network storage and some kind of hypervisor, it’s worth digging into what others have been doing recently. A quick google image search for homelab diagram reveals a wide variety of approaches. Many come from /r/homelab so let’s dig a little further in that direction. I’m explicitly date-restricting my searches as best-practices can change frequently and I’d like to get a feel for what’s considered current.

Things I see people are up to:

For reference, let’s quickly sketch out my current home network. I know it isn’t fancy. 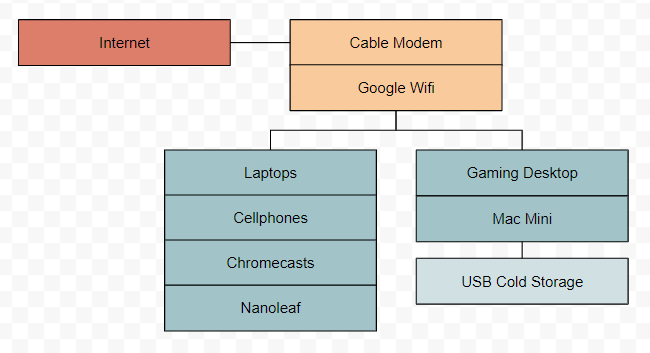 Everything’s connected via wifi and there’s a pair of USB drives that I connect on an irregular basis to perform backups.

Looking around at /r/homelab, it’s easy to see how some folks get carried away. If you’re not careful you could end up with a full 48U rack and $10k-$100k worth of hardware. I’d like to try and keep the scale of the implementation in line with the requirements, so I suspect I’ll be able to keep this under $5k. To put a cap on it, let’s limit the scope of hardware redundancy to prevent data loss, not to prevent downtime (i.e. redundancy in hard drives, but that’s it).

I think I can accomplish my goals with dedicated network storage and a dedicated hypervisor. I’ll also buy a Ubiquiti Dream Machine while I’m at it to replace the Google Wifi I’m currently running. The UDM supports VLANs, VPN, etc, and fits in a relatively small space (rack-mounted hardware isn’t an option in my current apartment).

This all leads to a relatively modest target layout as follow, noting the three ethernet connections in purple. 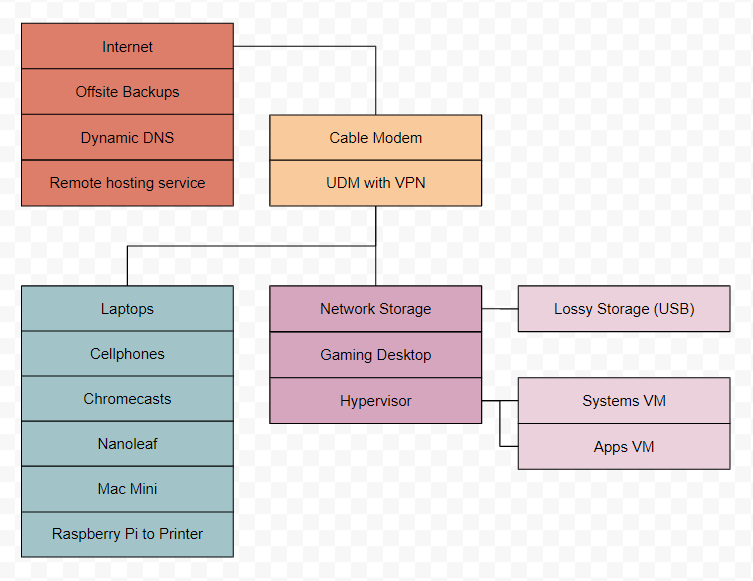 Next, we’ll look into which network storage and which hypervisor will fit the bill.